A few weeks back, a mother of a soon-to-be-5-year-old little girl called very excited to book a Princess Elsa character to attend her daughter’s Frozen themed birthday party. We checked the calendar, confirmed with the entertainer and were able to secure her for this very excited client. A few weeks later, on the Friday before the party (only 2 days before), we received a message from the Princess Elsa character that she had become ill with the flu and was unable to attend the party that following Sunday. We panicked and went to work trying to find a replacement.

One of the benefits of working with an entertainment agency like ours, Memorable Event Entertainment, is that we work with such a large team of entertainers, we almost always have someone we can send last minute to cover. Also, we are even willing to reach out to other companies doing whatever we can to insure that our clients don’t go without their entertainment. So that’s what we did. First we scrambled to message the other entertainers on our team that do characters but none of them were available. Then we started calling companies similar to ours to check their availability and all of their Princess Elsa characters were booked too! Then we decided to contact entertainers on our team that offer face painting and balloon twisting, but don’t necessarily have a Princess Elsa character costume to see if they would be available and interested in getting one to save this birthday party… and sure enough, our entertainer

from all the way in Temecula/Murrieta area was willing to save the party! She not only traveled more than an hour to get to this birthday party in Yorba Linda, but she spent her Saturday scrambling around to buy a Princess Elsa costume and a wig. The children were so excited and as always, they truly believed she was the real-life princess! They wanted to know where she lived, where her sister Anna was, if she still had super powers, if she was still friends with Olaf and they jumped for joy that they were able to spend time with the princess. She sent me these photos after the event and her heart was filled with joy that she was able to fill in for this party and make the birthday girl so happy!

We have a very special appreciation for this entertainer stepping up like she did! Her name is Savanna and she is a very talented face painter and balloon twister and loves dressing up as Sprinkles the Clown. She offers her clown, face painting and balloon character services mostly to birthday parties in Murrieta, Ca and Temecula, Ca area, but she will travel outside of the area when needed and we also work with tons of other entertainers that are based all over the Inland Empire and Southern California region.

If you would like to book a Princess Elsa character or any of our other children entertainers, call today! 888-750-7024 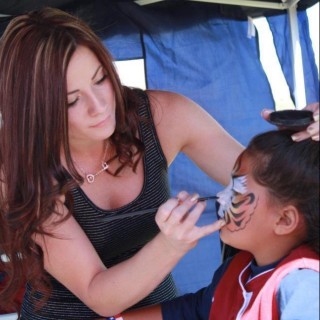 Cynnamon Simonson is a professional face painter and the owner of both Memorable Event Entertainment and Bay Area Party Entertainment serving both Southern and Northern California.